'....Since I was about twelve years old I have been an avid reader of poetry. I took poems with me wherever I went, and I read them in the rain, on buses, in bed, in despair, on river banks. Not, mostly the poetry one is obliged to study to pass exams, but the exiled poetry, which crosses frontiers: Hikmet, Lorca, Mayakovsky, Weores, Akhmatova, Vallego, Cavafy, MacDiarmid, Ritsos, Adonis, Darwish...the list doesn't end.
....The verses cover many years of my life. They are not, however a by-product. Rather they stand in for the progenitor or more accurately, I think the mother, of everything I've written. This is why I call them 'Pages of the Wound'.'
from John Berger's sleeve notes to his recording of the ‘Pages of the Wound’ poems. (Audio Arts, 1995)

A small number of the large 'Road' prints (above, 320mm x 660mm) are available. They are signed, numbered, unfolded and suitable for framing.

PAGES OF THE WOUND

This book, published in 1994, was the first collection of poems by John Berger to appear in print. Forty six poems are featured including his 'At Remaurian' series from the early 1960s. Each of the nine poems in that sequence is accompanied by one of his striking photographs, hand-printed from the original 120 negatives and mounted in the book opposite the relevent poem.
'When I was writing the poems I was taking the photographs at the same time, they were born simultaneously and for me they are inseparable ....'

His collaborator, the photographer Jean Mohr commented on his friend's use of the camera,
'He taught me a few things, ...that you can be a prisoner of your technique... and in the few pictures I know of his there is a lot of innocence, and innocence is quite close to poetry and to childhood'.

In contrast to his small photographic output John Berger produced a great many drawings throughout his long life and 'Pages of the Wound' contains two beautiful examples specially made for the book. Printed by litho these drawings (320mm x 660mm) were designed to fold out of the book.
'I found it a fantastically interesting challenge which I'd never faced before - how to make three images which must be connected and separate at the same time...As I thought more and more about the long page which opens out, the idea of the road occurred to me...because many of the poems are about the experience of travelling, of emigration, sometimes of arriving. I'm crazy about motorbikes and the first drawing was a combination of road and motorbike. The second drawing at first doesn't appear to look much like a road but in my mind it was because the three objects - the dress, the shoes and the hairbrush - amount to the portrait of a woman. I put a verse (of the poem Separation) onto the drawing because I'm fascinated by the whole business of writing words on drawings.'

Included as a frontispiece is, 'Self-portrait, 1945', a reworking for the book of an etching he made after leaving Chelsea School of Art.

In addition the book contains a loose photograph of his daughter Katya Berger taken in 1967 in the Jura mountains. Printed from John Berger’s original negative and initialled and numbered by him, the photograph (image: 110mm x 110mm) is suitable for framing.

This first edition of 90 signed and numbered copies of 'Pages of the Wound' was designed, printed letterpress and published by John Christie at Circle Press in Notting Hill, London in 1994.

Last remaining copies of the first edition
Price: £650.00 including postage and insurance


Please email: john@objectifpress.co.uk with any enquiries about the book or the two individual, signed prints. 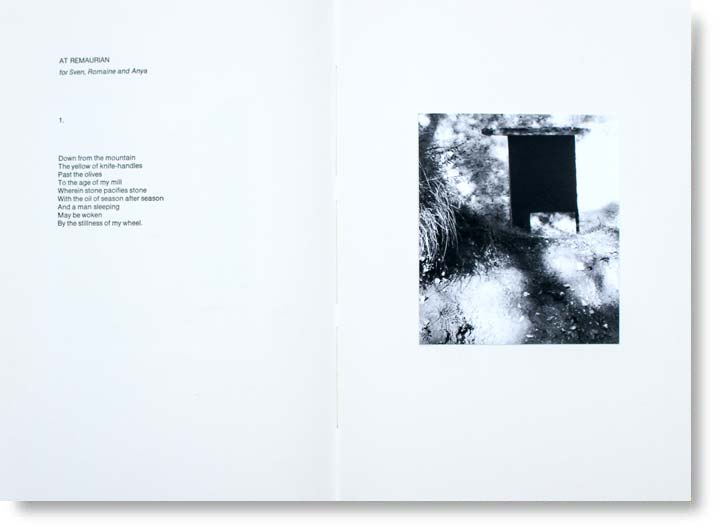 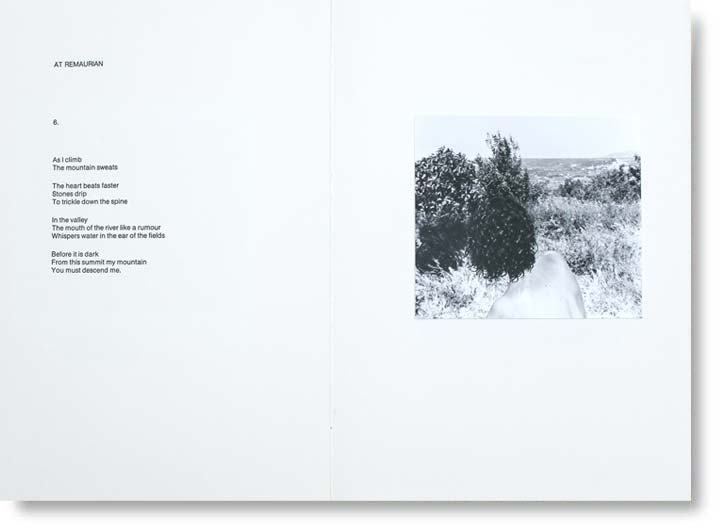 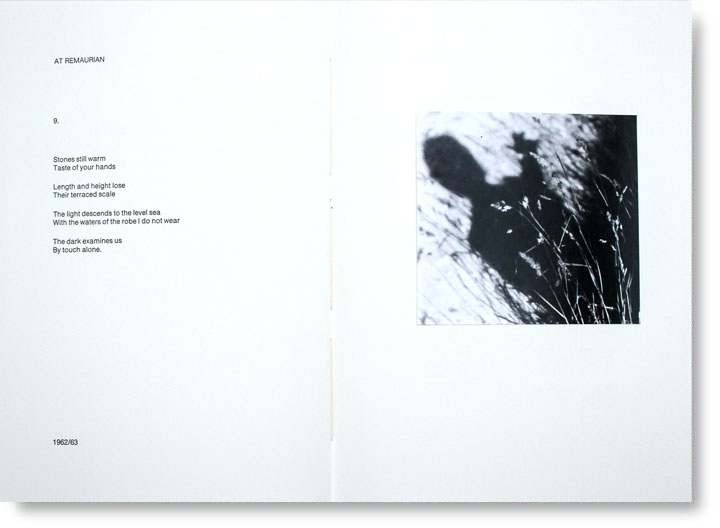 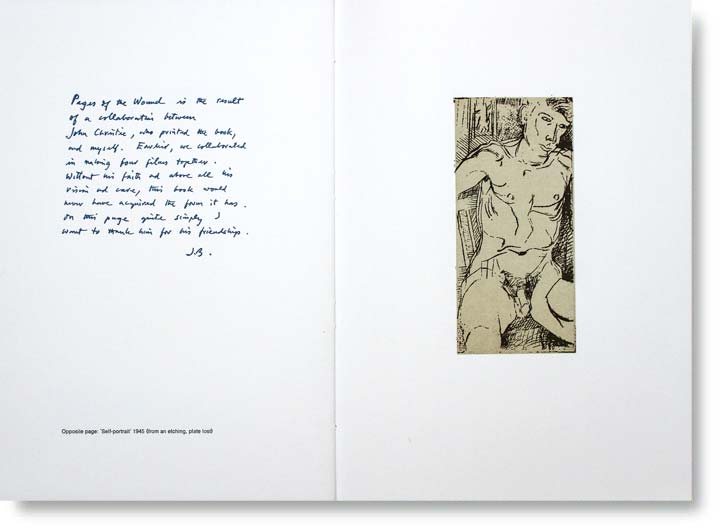 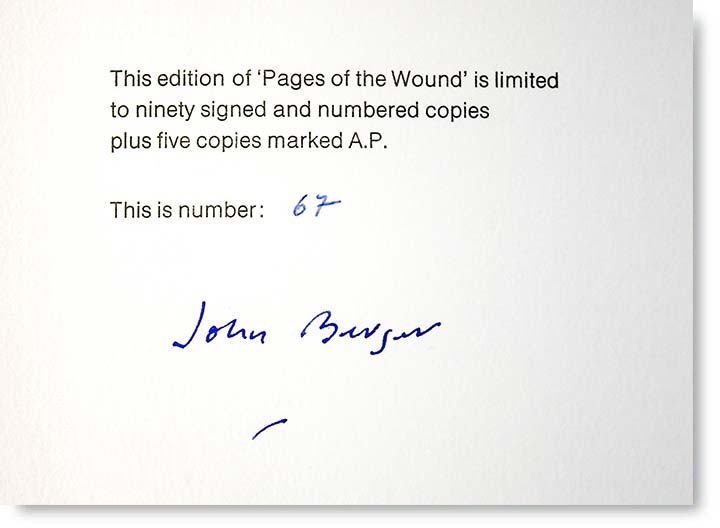 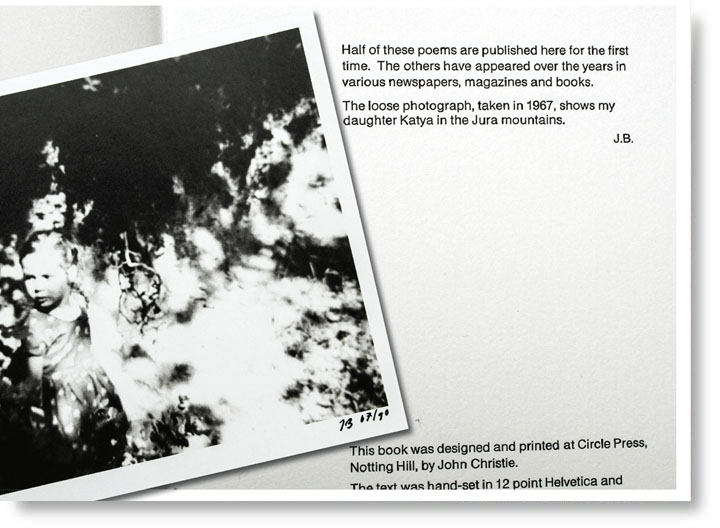